What a day for this last concert of this tour: hot and humid, just suffocating. And what a site: failing air con combined with closed doors during the concert. In the break you had to decide between getting something to drink and getting some oxygen. The queue waiting to get outside was longer!

I was very happy that the hall was furnished with chairs for this concert. IÂ’m sure I would have fainted under the given conditions. My brain felt like mash, which made it really hard to concentrate. I believe the major part of the audience felt very similar. Everybody wanted so hard to stay focused on the music that there was only little strength left for cheers between the songs. It must have been difficult for the musicians to deal with such a silent audience. At least Alexander complained about it after the first seven or so songs. The audience tried to comply with AlexanderÂ’s demand but too many cheers would have taken away what little oxygen was left. Sorry guys, this was not your fault. I hope the standing ovations at the end proved how pleased audience was by the performance and how blessed people felt.

But also Ernst and Alexander were not left unaffected by the circumstances. However they seemed to cope much better with them than their audience. Nevertheless, Ernst was a bit confused at the beginning about the things that belonged inside the grand piano (to create his special sounds) and about the time to take them out again. These first small mistakes made Ernst to check his preparation much more carefully than he usually does. So the audience could get a better look on the various parts that went in and out.

But let us now turn to the good part of this concert Â– the music! The set list was almost the same as in the concerts before (see this link, I took from the German forum: http://www.setlist.fm/setlist/deine-lakaien/2012/theaterfabrik-leipzig-germany-53dfab89.html), I think, Â“LonelyÂ” got replaced by Â“ReturnÂ”, the latter was definitely in (as mentioned, I was completely brain mashed). It started with two ballades and the audience was drawn completely into the musical world of DL after Â“2nd sunÂ”. Among the first six pieces were 4 ballades, which set a rather quiet mood. Perhaps this was another reason, why the audience was not as cheery as usual during DL concerts. This time I fell totally in love with the contrasts of Â“Follow meÂ” that appeared much stronger in this acoustic version Â– so soft and so vigorously demanding. Much stronger compared to the old acoustic version of this song on the Â’95 album. A sheet of paper (presumably the set list) had remained where it was not supposed to be after Â“The gameÂ” Â– but Ernst fixed that quickly.

Â“A fish called princeÂ” is a lesson about the art of preparation. Simple but effective! I admit that Â“simpleÂ” is relative here Â– but compared to the two hours it approx. takes to prepare a Cage piano, ErnstÂ’s way to get the desired sounds is way more practical for concerts. And who would have thought that an empty bottle of water put on the strings creates a different sound than an empty bottle of beer as it was used in the concert in Berlin (the tour 2008). The recording of this song from the Berlin concert can be found on the special edition of Indicator.

This time, I got a good view on ErnstÂ’s hands, though I did not manage to catch a seat in the front. During Â“Mirror menÂ” he is playing with almost everything fingers, the edge of the hand as well as the flat hand, fists, elbow, arms, and of course a stick to beat up the poor piano. But still this is not just brute force but strength used with amazing precision. (kind of direct development from the Russian piano school Â– no offense!) Adding AlexanderÂ’s eerie singing this remains one of the best DL pieces!

I can see that this is getting too long but allow me a few more words about the songs, which have not been performed in acoustic version before.

In Â“GoneÂ” the tricky rhythms were captured very nicely. The harp-like sounds in the studio version of Â“Without your wordsÂ” appeared naturally as arpeggios in the piano part but with some edge in the rhythm that created a surprising friction with the smooth flowing voice of Alexander. IÂ’m afraid, I may have mentioned this too often: I really adore ErnstÂ’s accompanying and, of course, his (re-)arrangements. In this concert namely the one of Â“Fighting the greenÂ”, which astounded me most. This song has many different synthesizer layers in its studio version, each of them rather simple but together they create a complex texture. That was the reason, why I was very skeptical: this was either too complicated or too simple for an acoustic set. What can I say? I was won over completely! The song got reshaped and here the contrast (again! Is this just me?) was set between being enormously forceful (this part is clear of course) and a very calm silence full of fear. Honestly, I never got this before. The acoustic set of Â“Blue heartÂ” was straight forward with rhythmic stanzas and arpeggiated (is there such a word?) chorus but as captivating as ever!

I absolutely agree with the voices on the German forum that demand a new acoustic album after all these years!

Nevertheless, it is impossible to record the excitement that builds up before you get to listen to a new song or even new arrangement of a song, since with DL these are so different that they can count as new songs. This cannot be replayed in the living room.

So thanks a lot for this truly wonderful concert!

@ all the other colour-ize members who were there: please take my apologies that I did not mingle Â– besides my mashed brain, my legs felt like pudding so I was just happy that all I had to do was sit and listen

Ha ha I was hoping to do the English language report on this one
Anyway what else to say...I was in the front row, but nearer to Ernst this time whereas for the other concerts I've been at I was nearer the other side of the stage. And in some ways I think Ernst was the star of the show here, whereas during the Indicator tour when we had Alexander AND the others (the strings players do put on quite a show themselves as well), sometimes I didn't notice Ernst as much. (Well, apart from when he played with his feet in Berlin).
Here he really seemed to put his heart into it and I quite often almost forgot about Alexander which I never did before, ha ha... I put a video on youtube of Ernst during part of Mirror Man so here it is:
http://youtu.be/BjyaR7tD5gw hee hee not bad for a 64 year old!!!
Yes they definitely DID do Return and not Lonely, you are right dreamdancer
I was also really pleased that they did play Bei Nacht as I guess a lot of people did request that - I know that I did and Lady Ash said she had too. I heard it was a bit better concert than the one in Offenbach the night before, that they seemed more relaxed here, well they definitely did seem quite relaxed, well as relaxed as Alexander ever gets, I think. It did seem much more informal than the Indicator shows. And long, with an intermission!!!
I was quite amazed when Uli gave him her ticket and Ash's CD to sign, I wouldn't have been quite so brave, but it showed that he was in a good mood!
It was good to see everyone again too and finally to meet Heike and Steven for the first time as well. And yes courtesy of my lovely man Colorwriter there were some nice cakes too
Another thing that I noticed once again and my friend Dave noticed back when we went to the Berlin show in Oct 2010 - German audiences are much more polite than British ones...even if Brits are good at queuing USUALLY...there would definitely NOT have been such a polite queue for the bar!!!!!!!!!!!!!!!
I bought a few things at the Merchandising stand too of course as they had fridge magnets and mugs, yay! I had missed out on the mugs during the February run of the Indicator tour, they had already sold out by the time I got to the show in Munich. 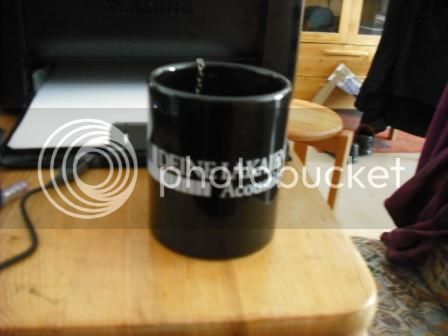 Truth be told, Rhiannon, dreamdancer, I am so sorry that I got to see almost nothing of Ernst's playing in this show from my place. Much as I like Alexander (and I do like him ), I agree that this was more like Ernst's concert. It's not that the singer sang any less well -he definitely did not- it's just that in normal shows you don't get to see how utterly brilliant Ernst really is. Being seated next to me, my daughter merely shook her head and said "now it's time to sink into deep depressions" regarding her own musical prowess at the piano.
That performance was really, really beyond my powers of description.

dreamdancer ... that is really beautifully written and very well observed. I really enjoyed reading your report as I could understand the appreciation and certain degree of devotion... You have found nice words. Thank you.

Me too, I really do appreciate Ernst's piano playing ...

Rhiannon + Ash.... the mirror men are amazing and when I witnessed that for the first time, I couldn't believe it. I also adore the way Alexander expresses anger in that song.
It is brilliant.

I cannot deny this But this is why I like this place - I know, I am not alone
Zuletzt bearbeitet von einem Moderator...: 18 Apr 2016
B

It's about time somebody wrote about this in the English forum. Thanks for the details, dreamdancer and everyone.

Thx, BlueHeart and Colorwriter! I was afraid, it might be a bit too long. I simply cannot help it - I love this music too much

not too long where are the foot notes and the NB's....thank you again DD thank you thank you..one of these days Alice i will get to see them I will show my appreciation rabidly just to make up for you all :ymdevil: :ymdevil: :ymdevil:
again Dreamdancer has graciously brought us this well translated event... @ Blue heart she is our rosetta stone so to speak..

WE want a cup WE want one we want oooonnnneeee.. I will provide a weeks worth of Zombie protection promise I got a box full of moon penquins at my disposal!!
get us the cup we needs it our precious yes we do .. (or show me the way to buy one)

humidity and heat are only good for Orchids humans not so much..thank you DD for the efforts all the same..
Please specify which 'he' signed the ticket?

RaBBitFan meinte:
WE want a cup WE want one we want oooonnnneeee.. I will provide a weeks worth of Zombie protection promise I got a box full of moon penquins at my disposal!!
get us the cup we needs it our precious yes we do .. (or show me the way to buy one)

humidity and heat are only good for Orchids humans not so much..thank you DD for the efforts all the same..
Please specify which 'he' signed the ticket?

@rabbitfan
Alexander took the CD and the ticket, then they both signed it in their break and somebody else returned them to Uli and me.