So...since there are some concert reports in the German part of the forum...I thought I'd write an English language one too... I guess there probably weren't too many from the English forum at the concerts, right?
Anyway my friend and I went to the Berlin one, we had arrived early in the morning after taking a plane from London so were already a bit tired, but the concert was so great... It was the first time either of us had been to a concert in Germany so it was also interesting to see if it would be different than in England - I've also been to concerts in Canada, France, Russia and Ukraine before. My friend noticed that the Germans were quite well behaved compared to English audiences, ha ha! There was no beer spilt on the floor or drunk people being idiots...both of those things are normal at concerts in England I'm afraid! Also he said the toilet was very clean - usually in venues in England they are pretty horrible. So...a nice impression! We thought the venue was quite nice too.
Anyway...we didn't have a very good view while the opening act was on (and we arrived a little late), she did have a lovely voice and played the piano well but her songs were not the greatest (her name is Vic Anselmo). We managed to get nearer to the stage for Lakaien so had quite a good view of them. It seemed like Alexander V looked right at me a few times but I've probably got that wrong. I'll copy the playlist that someone wrote in one of the German concert reports, because I wouldn't remember it exactly:
on your stage again
over and done
fighting the green
in to my arms
who' ll save your world
where you are
gone
immigrant
europe
forest
six o' clock
one night
blue heart
return

through the hall
colour-ize
reincarnation

along our road
so you can see it was pretty long and they did play quite a lot of older and some not so well-known songs too. Apparently they don't often play Forest, but that was really AMAZING live. I absolutely loved that. Reincarnation too. And there are several of my favourites on that list, so I was pleased. Well, they were all great, and both Veljanov and Ernst Horn seemed to be in a good mood. At one point the cello player went over and started teasing Ernst H and playing with his keyboard, so Ernst H then started to play it with his foot... hee hee it was funny to watch them. The guitar player was pretty crazy too.
Veljanov did move about the stage quite a lot so he was very close to us some of the time too. He has a slightly eccentric air about him. I'm not really very good at writing reviews of concerts, I have to admit 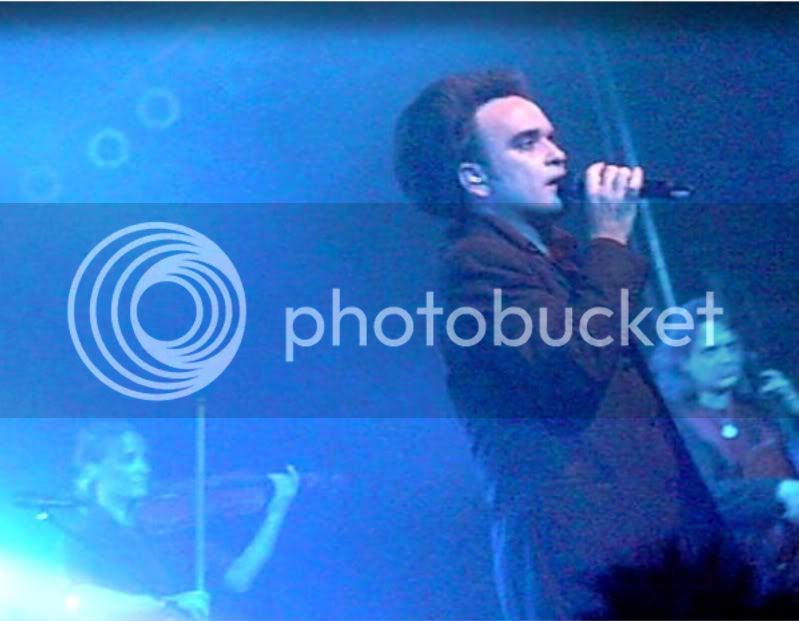 Afterwards we managed to meet Queeny and Nachteule from here, so that was great too. I'm very glad we made the effort to travel to Berlin and I hope I'll get to see more Lakaien concerts sometime.

I was in Berlin, too. You are right - the venue was very nice. Much more hospitable than the E-Werk in Cologne. Alexander was in a very good mood as always during this tour, though a little less talkative. I felt that the band played even better than in Cologne. The atmosphere was somewhat more enthusiastic, maybe due to the place which is more intimate - the stage is closer and lower. I totally loved it! Immigrant and Europe are live even more experimental than on the album. Six o'clock and Through the hall just rock! When I think about the concerts, I am still enchanted :ymdaydream:

Yes it was definitely worth travelling to Germany just for that concert... :x

Hello Rhiannon,
How nice that it was worth the effort!
Yesterday, I read an English interview with Mr Veljanov (September 2010) where he says that the band will be on a tour through Europe in November ... possibly stopping at London. Unfortunately, I couldn't find the interview today and I haven't read about it anywhere else.

Does anyone know more about it?

I posted it in the "Indicator" thread, but here you go:

Thanks dreamdancer! I guess I did see that interview when you posted it before. It's a shame there are no dates showing yet for London. I'm even thinking about going to Germany again in February, ha ha!

Right so! One concert is definitly not enough

Rhiannon
I appreciate your review any peek into the DL world I can get even if only vicariously is deeply appreciated... I still don't have the album yet.. next month though..
good to know about English concerts and loo's.. I am very very sorrry I missed Ernst playing the (piano or cello?)with his toes.. I am also sorry I missed Alexander's vocal weirding way.. most importantly pained that I missed the music.. =((
I think I would recommend that they probably not tour over here.. we like to throw things at the band members.. things like mensingwear(DD is this right?) and cheese.. bottles and what not
we are a vile group of miscreants.

I wonder who lines up the fluffer acts before Deine Lakaien plays? do they(DL) pick them? just wondering

glad you got to meet Queeny..and et al.

Sorry for my bad English: What are "fluffer acts"?

I guess Rabbit means the opening act....we don't say fluffer act in England either, it must be an American word.

er uhmmm let see if I can keep it clean and yet explain :-?

deepest apologies to the mods and the 'opening'act

anyway the Lakaiens seem very much to be into setting the right mood and working their patrons.. so I was wondering if they chose the act before hand to try and achieve a certain affect on the audience...

I also wonder who picks the opening acts for DL. I have no idea, I have to admit. :-s QNTL was chosen by themselves, I guess. Good old WFT times ; And Robort Wilcocks came from Sleeping Dogs Wake or Summit, respectively - two other opening acts. So it seems DL used to have a close relation to their supports. Umm, you're right, this is still not an answer to your question :-B

are you telling me that Qntal and Robert Wilcox were part of the opening team???
fabulous !! I just insulted Michael Popp and Syrah and Robert Wilcox.. by calling them fluffers...
*nice* L-)

Qntal was opening the WFT tour, and Sleeping Dogs Wake were supporting FEE, while Summit was supporting act for Kasmodiah (if I remember correctly). As I understand it, you only called Vic Anselmo a fluffer :ymdevil: No, but this is really not kind of you. :ymdevil: She really has a good voice and you have to have guts to perform in front of an audience just with keyboard and your voice.
She made it :-!

No you are right it is not kind of me..but you all get to see Irish Luck in the making.. ie a funny analogy gone horribly wrong..
she has a nice voice anyone who can sing well and play the piano is to some degree accomplished.. I am sure that there maybe some connection to her being selected before the Berlin concert... there is the Das ICH factor.. he did a remix of her das dunkleland and well there within may lie the reason she was chosen.. however this statement is highly subjective and is for speculation only

RaBBitFan meinte:
..but you all get to see Irish Luck in the making..
Zum Vergrößern anklicken....

Ahh, now I see Still have to get used to this Irish Luck thingy...

ALice your the best :ymhug:
Speaking of Das ich
he will be in my fair city of Portland Oregon on thanksgiving day.. shame I will have my hands up a dead turkey's ass for most of the day .. I will miss it
for what its worth the recoil concert in PDX was soundwise fabulous but we didnt pay 37.50 to watch Alan Wilder hit the space bar on his mac.. tis the way of the electro..but some part of my monkey brain needs to see the performance of it all.. of coarse DL is the master of this... as evidenced by Rhiannon's take of this concert...

Just wanted to say...I'm crazy, I've just decided to go to Munich...
well, I can combine it with a visit to my Bavarian penpal Birgit.
D